Log in / Register Cart (0)
back to Mahjong
Previous | Next

Upgrade your ordinary table into a professional gaming table with our protective non-slip mat for card, tile, and board games.

I love these table mats for mah jongg! Easy to transport in its carry bag and soft

This table cover is fabulous! I was very impressed with the quality and the weight of it. Works beautifully - tiles slide easily. I also use it when playing dominoes!

The table cover itself has a gorgeous color, it goes very well with Go equipment, but the bag it ships in as some other reviewers have noted is basically napkin paper, the first time I carried it by the strap it tore off entirely.

The cover is also a little frustrating (but not impossible) to roll up on your own. I would recommend getting a hard poster carrying case or similar to replace the bag, as that would also protect the mat from developing waves (which only happens if it is compressed while rolled even a little loosely, which it will be if you aren't rolling it perfectly with 2 people).

I use this mat to make my card table even across the foldable crease for easy storage of my Mah Jongg table. I then top it with a fitted tablecloth with a carpet style Mah Jongg mat to play.

The mat itself is a very nice tea green color, and has a very good nonslip bottom, the surface feels nice and holds things on it well. The bag, however, broke within 5 minutes. Other reviews are correct - it feels like its made of thick paper, I put the strap over my shoulder and it immediately ripped a hole in the bag just from the weight of the mat. So get this for the wonderful mat, with the expectation of buying a new bag alongside it. 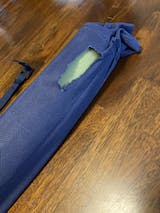